I am in the initial stages of researching a transnational story of Merino sheep, with a particular emphasis on their migration from the Iberian continent to Vermont. My intention is to create a feminist, queer, anti-racist historical novel featuring a shepherdx from Segovia and their journey to Vermont. 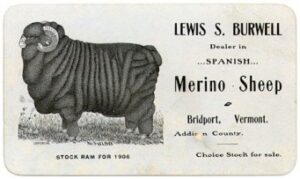 In 1810 a Boston Brahmin named William Jarvis, who worked as Thomas Jefferson’s consul to Portugal, bought several hundred Merino sheep in Spain. Previously, sheep were closely guarded by the Spanish royals, and it was illegal to sell them outside the country. Jarvis bought elite Paular Merinos, which he had shipped from Lisbon to Boston, with no expense spared for their passage. Jarvis’s international negotiation would come to have a significant impact on Vermont, where he had an estate. For decades to come, Vermont white settler farmers made good money on Merinos.

The boom and bust tale of Merinos in Vermont includes the story of my paternal ancestors. I grew up finding ads for Merinos on yellowed newspapers in my grandmother’s attic. Now I am interested in the global aspects of human/Merino history. Following a seminar on decolonialism last summer, I traveled to the once wealthy Carthusian Monasterio de El Paular, an hour north of Madrid in the Sierra de Guadarrama park, where the famous Paular Merinos were bred and raised by low-paid local shepherds. There I was fortunate to arrange a meeting with park research director Juan Antonio, who drove me into the gated and semi-abandoned fields behind the monastery, over an ancient cañada (sheep road), and to a restored shepherd hut tucked amid the park’s tree conservation efforts. In 2011, as part of a defense of their right-of-way, Juan joined contemporary sheep farmers in driving thousands of sheep down the cañada directly into downtown Madrid, where the sheep were once traded.

While some suggest that Merinos originally come from southern Europe and Greece, more convincing evidence points to the Berber Merini tribe in Northwest Africa. There is evidence that Merinos were transported to Andalusia in the 12th and 13th centuries. Sheep from most of Spain overwintered in Extremadura, which is part of a larger agrosilvopastoral system in southern Spain, la dehesa, a sustainable mix of forest and agriculture that supports biodiversity. The ecosystem is now threatened, and various efforts are made to sustain it and promote educational awareness.

What is the relationship between sheep and humans in particular cultural contexts? What light can Merinos shed on certain economies and the construction of gendered, raced, classed hierarchies? How can a focus on Merinos illuminate borders between nation states and regions? How has all of this changed over time?

Sheep, sometimes called “the poor man’s cow,” have always mattered to humans. They provide milk, meat, and perhaps most importantly, wool. Unlike the synthetics that replaced it, wool is a sustainable fabric that does not clog our landfills. Merino wool is considered the finest wool, long lasting, warm, durable, water resistant, and able to blend with silk and other fabrics. When I mention my interest in Merino sheep, people from places all over the world have a story to tell.